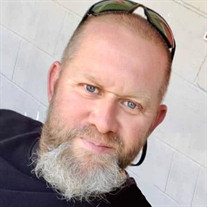 Andrew "Andy" Wyatt Reynolds June 12, 1972 – January 1, 2021 Pickens, South Carolina Andrew "Andy" Wyatt Reynolds, 48, beloved fiancé of Kimberly Simmons Tate, went to be with his Lord and Savior on Friday, January 1, 2021 at Baptist Easley Hospital. Born in Easley, Andy was the son of John Thomas Reynolds and the late Judy Gilstrap Reynolds. Andy was a graduate of Liberty High School and has worked at Pace & Reeves for the last 20 years. Andy loved his family, friends, and community. He was happiest when he was helping others. He never met a stranger and was a true friend to all. He loved riding his motorcycle and believed in enjoying life to the fullest. Andy is survived by his fiancé, Kimberly Simmons Tate; bonus sons, Aidan and Preston Tate; his father, Tom Reynolds; brother, Tommy Reynolds (Stacey); sister, Mandi Reynolds Turner (Joe); two very special cousins, Bryan Gilbert (Ashley) and Ashley Gilbert Fisher (Kevin); and numerous nieces and nephews; and the rest of his family and friends. Andy is preceded in death by his mother, Judy Gilstrap Reynolds; as well as his grandparents, Wyatt and Leila Gilstrap and John and Martha Reynolds. Funeral services will be at 2:00 PM Saturday, January 9, 2021 at the Pickens City Amphitheater. For those who would like to participate in the processional, it will begin at the parking lot between Liberty Elementary and the football field at 1:30 PM. The family would like to express their gratitude to all those who have shown their love, support, and prayers during this difficult time. In lieu of flowers memorial donations may be made to by visiting the following link: gf.me/u/zfcptv “Don’t cry because it’s over. Smile because it happened.” – Dr. Seuss Mountain View Funeral Home is serving the Reynolds family.

The family of Andrew "Andy" Wyatt Reynolds created this Life Tributes page to make it easy to share your memories.

Send flowers to the Reynolds family.