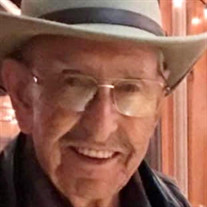 Ben Tillman Hendrix, Jr. Pickens, South Carolina Ben Tillman Hendrix, Jr. 90, loving husband of Joan Hendrix, went home to be with his Lord and Savior on Friday, January 22, 2021. He was born in Greenville County the son of the late Ben Tillman Hendricks Sr. & Lila Burgess Hendricks. He was predeceased by a sister, Elsie Hunt, brothers James Bruck Hendricks and a brother Carl Hendricks. He was widowed in 1973 by his wife Yvonne M. Hendrix and most recently his granddaughter, Jessica Reeves. Survivors include his wife of 42 years, Joan E. Hendrix, his sons, Mark A. Hendrix (Jill), Warren E. Hendrix, Terry Dykens (Mary) of Pickens, Matthew Z Hendrix (Keiki) of Piedmont. His daughters, Sandra H. Gardner (Stacey) and Susan H. Trotter (Basil) of Pickens. He is survived by his brother Larry K. Hendricks of Easley, S.C. He was “Papa” to 13 grandchildren and 16 great grandchildren. He served his country during WWII as a member of the Army Air Core and was stationed in Germany. He was a Mason and a member at the Keowee Lodge in Pickens. He was a truck driver for most of his life. He logged in over 250,000 miles without an accident, and over his 41 years he drove for Buckeye Fabric, Am-Can, Ryder, and retired from Southeastern Freight Line. He was an avid golfer and he loved to read. In his later years when he could no longer play golf, he spent his time reading and studying God’s Word. An active member, he taught a Sunday school class at Pleasant Grove Baptist Church until his recent hospitalization. The family would like to express their gratitude to the Doctors and nurses in the ICU at St. Francis Hospital Downtown for their compassion and wonderful care. A date and time for his memorial will be announced later. Mountain View Funeral Home is serving the Hendrix family.

The family of Ben Tillman Hendrix, Jr. created this Life Tributes page to make it easy to share your memories.

Send flowers to the Hendrix, family.