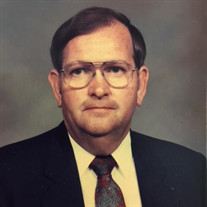 Reverend Billy Glenn Freeman Pickens, South Carolina Reverend Billy G. Freeman of Pickens, South Carolina, born on March 20th 1935 went to be with our Lord Jesus Christ early Friday morning the 4th of May 2018. A son of the late Roscoe and Esther Freeman, Billy was a graduate of Pickens High School, Anderson College, Central Wesleyan and New Orleans Baptist Seminary. During his ministry Billy pastored several upstate churches. Also, he worked voluntarily at Magnolias Assisted Living over 8 years. He was a member of Jones Avenue Baptist Church and the Jim Chapman Sunday School class. Before his call into the ministry, Billy worked at Alice Manufacturing for 24 years. He also served in the U.S. Army National Guard for 7 years. He is survived by his beloved wife Carolyn Ellenburg Freeman, having recently celebrated 60 years of wedded bliss. He is also survived by his sister Hazel McRorie of Asheville, North Carolina along with several nieces and nephews. Reverend Freeman is predeceased by his parents and three brothers; Roy Freeman, Restee Freeman and Virgil Freeman. Visitation will be 1:00 pm until 2:45 pm Monday, May 7, 2018 in the chapel of Mountain View Funeral Home. The funeral service will follow at 3:00 PM officiated by Dr. Roger Couch and Reverend David Ellenburg. Honorary escorts will be David Naphegyi, Billy Gilstrap, and the Jim Chapman Sunday School Class and Reverend Freeman’s nephews will serve as active pallbearers. The family would like to express a special thank you to Rachel and Fred Baldwin and David Naphegyi of Jones Avenue Baptist Church for all their help and to the team at Interim Hospice. Flowers will be accepted or memorials may be made to Jones Avenue Baptist Church Mission Fund, 614 Ross Avenue, Easley, South Carolina 29640. Mountain View Funeral Home is serving the Freeman family

The family of Reverend BIlly Glenn Freeman created this Life Tributes page to make it easy to share your memories.

Send flowers to the Freeman family.