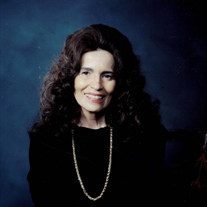 Bobbie (Bobi) Sarepta (Cox) Cloer of Seneca, SC, died on March 22, 2022, at the Cottingham Hospice House in Seneca. Bobbie was born on August 12, 1938, the daughter of Margaret (Emma) Cox of Brevard, NC, and Terrell Pappy of Jacksonville, Fl. Bobbie grew up in Brevard, NC, with her brothers, James Dennis (Denny) Landreth and Larry Landreth. She attended and graduated from Brevard High School in 1955. Bobbie attended a local Baptist church in Enan. She married Nathaniel (Nat) William Cloer on March 5, 1962, and they settled in Lafollette, TN. Nat and Bobbie moved to Asheville, NC, later in 1962 and welcomed a son, Nathaniel Thaddeus (Thad) Cloer in 1963. Bobbie finished cosmetology school in Asheville and worked as a hairdresser and wig designer. Bobbie would enjoy all things fashion for the rest of her life. In 1969, Bobbie welcomed her second son, Clayton Parnell Cloer, and the family moved from Asheville, NC, to Pickens, SC. Bobbie stopped working to stay home with her children in 1974 and she took an art class with Marie Porter in Easley. The class and the relationship would change her life. Bobbie quickly developed the capacity to mix color, relate to the canvas, and produce astounding oil paintings. Bobbie excelled and enjoyed painting unlike anything in her life. She painted day and night, traveled to workshops across the south, and entered competitions at the state fair where she won blue ribbons with her oil paintings. Marie introduced Bobbie to watercolor painting, and she found another medium that she loved. She also earned blue ribbons and won local art shows with her watercolor paintings. She galleried her work at the Tempo Art Gallery in Greenville in the 1980s and regretted every painting that she ever sold. Bobbie expressed herself through the canvas, the paper, the paint, and the design. The family relocated to Seneca, SC, in 1987. In 1991, Bobbie was baptized at the Utica Baptist Church in Seneca, SC. She came to know Jesus Christ personally through a series of messages by Dr. Charles Stanley. Bobbie read for recreation and education. She enjoyed travel with Nat to Scotland which was a lifelong dream. Bruges, Belgium, was her favorite city while Paris and Rome inspired her. She also visited New Zealand, England, and the Virgin Islands. Bobbie and Nat had houses and friends in Hilton Head, SC, Highlands, NC, and Memphis, TN. Bobbie and Nat resettled in Seneca, SC. She was a lung cancer survivor of 18 years and battled health issues for the last years of her life. Bobbie is survived by her husband, Nat, of 60 years, her two sons, Thad (Nena) of Mauldin, SC, and Clayton (Linda) of Ocoee, Fl, her five grandchildren, Gabrielle (Lee) Hinson of Mauldin, SC, Nathan Cloer of Greenville, SC, Alexandra Cloer of Greer, SC, James Cloer of Charleston, SC, and Christian Cloer of Charleston, SC, her brother Larry Landreth of Sun City, SC, and her sister Latrell Mickler of St. Augustine, FL. The family will be receiving friends on March 26 at 10:00 AM with a memorial service at 10:30 at the Hepsibah Baptist Church in Seneca, SC. A private family internment at Seneca Memorial Cemetery will follow. In lieu of flowers the family requests donations be made to the Oconee Christian Academy scholarship fund and Hepsibah Baptist Church in Seneca, SC. Mountain View Funerals and Cremations- Seneca Chapel is assisting the family of Mrs. Bobi Sarepta Cox Cloer.

The family of Bobbie Sarepta (Cox) Cloer created this Life Tributes page to make it easy to share your memories.

Send flowers to the Cloer family.