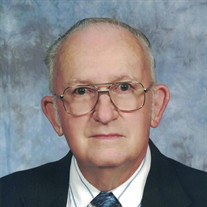 Charles “Wallace” Alexander Pickens, SC Charles “Wallace” Alexander, age 88, of Pickens, SC, passed away peacefully on Monday, November 22, 2021, at his home. Born August 24, 1933, in Pickens, SC, was the son of the late Tolvin and Cora Simmons Alexander. Wallace was a member of Pickens View Wesleyan Church for forty years, as well as a member of Maude Youngblood’s Sunday School Class. In addition to his active participation in church, Wallace was a veteran of the United States Army and worked for Ryobi for 34 years as a machinist. Wallace is survived by his beloved wife of 67 years, Lizzie “Cookie” Alexander of the home, two daughters; Kay Bolding (Glenn), and Rhonda Hester (Larry) both of Pickens, SC. Three grandchildren; Regina Harned (David), Tracey Brock (JJ) and Steven Hester (Kelly), as well as five great grandchildren; Madelyn Hester, Brysie Brock, Josiah Hester, Mackynzie Hester, and Montgomery Hester, and one sister, Winniefred Robinson. In addition to his parents, Wallace is preceded in death by five brothers and five sisters. The family will receive friends on Saturday, November 27, 2021, from 1:00 P.M. – 2:00 P.M. at the Mountain View Funeral Home Chapel, with funeral services being held at 2:00 P.M from the Chapel of Mountain View Funeral Home . Burial will follow at Hillcrest Memorial Park. Flowers will be accepted or memorials in Wallace’s honor may be made to Pickens View Wesleyan Church by contacting 864-878-2324. The family wished to extend their heartfelt appreciation to the men and women of Upstate Hospice. The family is at their respective homes. Mountain View Funeral Home is assisting the family of Wallace Alexander.

The family of Charles Wallace Alexander created this Life Tributes page to make it easy to share your memories.

Send flowers to the Alexander family.