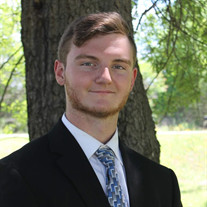 Christopher Hunter Todd Pickens, South Carolina Christopher “Hunter” Todd, 20 years old, of Pickens was promoted to his Heavenly home on Sunday, November 8th, 2020. Hunter is survived by his father, William Farrell Todd, mother, Christy Cooper Todd and beloved brothers, William “Taylor” Todd, William “Fisher” Todd, and Jonathan “Sawyer” Todd; his maternal grandparents, Skeets and Judy Cooper; maternal great-grandparents Robert & Margret Hannah and Carolyn Cooper. Paternal grandparents Farrell and Barbara Todd. Along with numerous aunts, uncle, and cousins. Hunter is preceded in death by his beloved great-grandfather, E.A. Cooper, Jr. Hunter was a shining light with a contagious smile. To say he will be greatly missed is an understatement. Hunter loved his family and friends and was always willing to help anyone and would do anything to protect them, especially his mother and his younger brothers. Hunter was an avid outdoorsman who enjoyed hunting and fishing. He was a skilled welder and machinist, taught by the best, his Popa Skeets. Visitation will be held from 12:00 noon – 1:45pm Friday, November 13th, 2020 at Landmark Baptist Church in Easley, SC with Funeral Service to follow at 2:00pm. Burial will be at Bethlehem Church Cemetery, 133 Bethlehem Church Rd, Pickens, SC. Mountain View Funeral Home is serving the Todd Family.

The family of Christopher Hunter Todd created this Life Tributes page to make it easy to share your memories.

Send flowers to the Todd family.