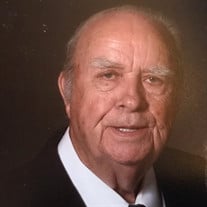 Clarence Mack Atkinson Six Mile, South Carolina Clarence Mack Atkinson, husband of Francis H. Atkinson, went home to be with his Lord on Friday, December 18, 2020, at his home. A native of Pickens County, Clarence was born October 18, 1925, the son of the late Albert and Lonnie Alexander Atkinson. Mr. Atkinson was a member of Six Mile Baptist Church. He was a loyal employee of Singer/Ryobi and retired from there after forty-seven years of service. Clarence is survived by his wife of 66 years, Frances H. Atkinson; a daughter, Shelia A. Banks (Hal) of Pickens; three grandchildren; Lindsey Hiott (Wes) of Pickens, Katie Garrett (Jon) of Pickens, and Hunter Banks, of Durham, N.C.; three great-grandchildren, Hadley and Hayes Hiott, Kennedy Garrett. In addition to his parents, Mr. Atkinson is predeceased by a daughter Rebecca Ann Gilstrap of Pickens, infant grandchildren; Kevin, Kayla, Justin, and Jacob Banks. Clarence was the last surviving member of his immediate family. Funeral Services will be private. In lieu of flowers, memorial donations in Clarence’s honor may be made to Meals on Wheels of Pickens County (349 Edgemont Ave. Liberty, S.C. 29657). The family would like to Thank Wren Hospice for the excellent care and support. The family will be at their respective homes. Mountain View Funeral Home is serving the Atkinson family.

The family of Clarence Mack Atkinson created this Life Tributes page to make it easy to share your memories.

Send flowers to the Atkinson family.