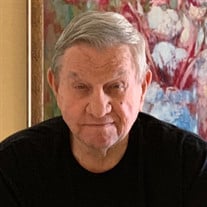 Dallas Dale Ball Pickens, South Carolina Dallas Dale Ball, age 85, husband to Nellie Ruth Hare Ball passed away peacefully Tuesday, October 13, 2020. Born December 01, 1934, Mr. Ball was the son of the late James Daniel Ball and Julia Amanda Brawley Ball. A United States Navy Veteran, Dallas achieved the rank of Commander and served as a JAG officer in the U.S. Navy Reserve’s Judge Advocate General’s (JAG) Corps. He was a graduate of the University of Maryland and obtained his Juris Doctorate degree from the University of South Carolina. Mr. Ball was a member of the South Carolina Bar and had a distinguished career as an attorney for more than fifty years. A working man’s lawyer he fought for the people. He practiced in Columbia until 1979 and Pickens County thereafter. Loved by his clients, he could not go to the grocery store in Pickens County without several clients pulling him aside seeking advice. His response was always the same; “come to my office first thing Monday and we will talk about it.” His office on Monday morning looked like a delayed flight in the Atlanta Airport. People loved him and his blue-collar approach. When he was not practicing law, he was usually working outside on a tractor or running a chainsaw. He loved to read, and he loved constitutional law. He was a mentor to many including his son and son-in-law. He provided opportunities and support for all five of his children and was a rock of stability to them when they needed advice. He was small in stature but to the family he was the Rock of Gibraltar. He will be missed greatly. Survivors include his wife, Nellie Ruth Hare Ball, three daughters, Susan Caroline Dover (Scott) of Pickens, SC; Elizabeth Abigail Harrison (Rob) of Pendleton, SC; Melanie Ruth Gilstrap (Jim) of Central, SC; two sons, Dallas Daniel Ball (Kimberly) of Bluffton, SC and Franklin Dale Ball (Julia) of Cumming, GA. Mr. Ball is also survived by 18 grandchildren and 11 greatgrandchildren. In addition to his parents, Dallas was predeceased by his brother, Gene Ball; sister, Betty Windes; and grandson, Logan Dale Evans. The family of Mr. Ball would like to extend a special thank you to Upstate Community Hospice House in Landrum, SC for the exceptional care given and incredible compassion shown to Dallas and the family during his time of illness. In lieu of flowers, memorial donations may be made in Dallas’ honor to the Agape Care Hospice and Palliative Care Foundation by visiting their website at www.hpcfoundation.org/donate or by mailing a check made payable to Hospice and Palliative Care Foundation (HPCF), PO Box 151, Drayton, SC 29333. The families will be at their respective homes. Mountain View Funeral Home is serving the Ball family.

The family of Dallas Dale Ball created this Life Tributes page to make it easy to share your memories.

Send flowers to the Ball family.