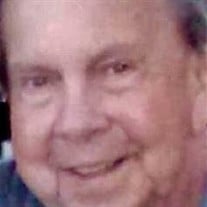 Ernest Earl Gravely Pickens, South Carolina Earl Gravely, 84, husband of the late Dot Gravely, passed from this life onto his eternal home with his Savior, Jesus Christ on Thursday, December 21, 2017. Born in Pickens County Earl was a son of the late Edward and Safronia Patterson Gravely. He was a member of Mountain Grove Baptist Church, and the Men’s Bible Class. Earl believed in doing his part to serve his fellow man, as a result of that conviction he held to, Mr. Ernest Earl Gravely served his country by joining the United States Army and was honorably discharged following his service. His family and many people in our community near and far have had the good fortune to benefit from his compassion by putting their feet under his table and enjoyed his love of cooking most any Christmas Eve. Earl was known for his willingness to help others in need. If you didn’t spend time with him on Christmas Eve, you probably would have known him from his years at Blue Ridge Produce. Survivors include his daughters, Donna (Scott) Raby of Pickens, Diane (Rick) Eades of Easley, grandchildren, Taylor Raby and her fiancé Donavan Hendricks, Olivia (Nick) Shoemaker Grayson Eades, a future great grandson soon to make his arrival, Colsen Shoemaker. Earl also leaves behind his close friend, Ms. Cleon Durham, you could see them out and about, at the Pickens Jockey Lot, any restaurant near or far, they were happy to enjoy each other’s companionship. As a result of the friendship of Ms. Cleon, Earl also leaves behind Randy Durham, Bennie Durham, Jeff Durham and Cleon’s entire family to cherish his memory as well as his brother James Gravely. Mr. Earl was predeceased by his parents, his wife Dot, a sister Viola Vess, brothers, Edgar Gravely, Homer Gravely, Albert Gravely and an infant brother Henry Gravely. Visitation will be 10 am until 11 am Saturday, December 23, 2017 at Mountain Grove Baptist Church with the funeral service to follow at 11 am in the church. Burial will be at Porter’s Chapel United Methodist Church Cemetery. In lieu of flowers memorials may be made to Pickens Senior Center, 129 Schoolhouse Street, Pickens, South Carolina 29671 or Mountain Grove Baptist Church, 644 E. Preston McDaniel Road, Pickens, South Carolina 29671. The family will be at the home of Rick and Diane Eades. Mountain View Funeral Home is serving the Gravely family.

The family of Mr. Ernest Earl Gravely created this Life Tributes page to make it easy to share your memories.

Send flowers to the Gravely family.