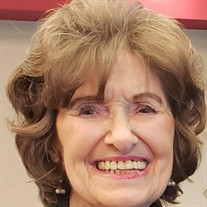 Esther Naomi Winchester Kelley of Pickens, 87, widow of the late Jerry Walter Kelley, entered her heavenly home on Sunday, Oct. 10, 2021. She was the daughter of the late Benjamin Tillman Winchester Sr. and the late Allie Bertie Collins Winchester. She was a homemaker and a long-time member of Grace United Methodist Church where she was a part of multiple music ministries including singing in the choir and playing handbells. Mrs. Kelley cherished her family. She was born into one of the most respected families in Pickens and was a member of a large and loving family. She was renowned for her cooking which was her gift of love to her family and to others. Her sourdough bread was legendary as were many of her dishes. Her grandchildren could always expect one of her delicious cakes for their birthdays, a gift she continued into the last days of her life. Mrs. Kelley was a devoted wife to her husband of 67 years and they loved traveling together. She was always behind the wheel of her trusty Cadillac. She even taught the grandchildren how to drive in her Cadillac while practicing loops around the circular driveway of her home. She is survived by four daughters, Carolyn Holder (Steve) of Lilburn, Georgia; Joyce Gillespie (Tommy) of Pickens; Marie Finley of Easley; and Frances Stewart (Phil) of Pickens; 10 grandchildren, Kelley Reid (Tim), Nikki Culbertson (Matt), Matthew Holder (Shilo), Heather Simmons (Lance), Cherie Yarborough (Clint), Meghan Knapp (Eric), Carly Fitzpatrick (Kason), Tiffany, Sabrina and Sarah Stewart; 19 great-grandchildren; and six sisters, Ruth Hinkle, Janie Sorrells, Myrtie Cochran, Mary Hull, Leona Crowther and Christine Kearney. In addition to her parents and husband, Mrs. Kelley was predeceased by five brothers, Daniel, Ben, David, Hubert and Valley Winchester; three sisters, Martha Reavis, Evelyn Breazeale, and Elizabeth Howe; and a grandson, Samuel David Stewart. Visitation will be at from 1:00 p.m. to 1:45 p.m. Thursday, Oct. 14, at Grace United Methodist Church, Cedar Rock Street, Pickens, with funeral services at 2:00 p.m. in the church sanctuary. Burial will follow at Hillcrest Memorial Park. Memorials may be made to Grace United Methodist Church, 309 East Cedar Street, Pickens, S.C. 29671. Mountain View Funeral Home is serving the Kelley family.

The family of Esther Naomi Winchester Kelley created this Life Tributes page to make it easy to share your memories.

Esther Naomi Winchester Kelley of Pickens, 87, widow of the late...

Send flowers to the Kelley family.