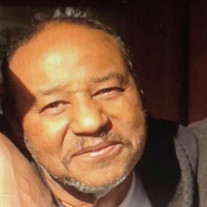 Hilton Lee Earle Seneca, SC Hilton Lee Earle age 69, of Seneca, SC passed away on Thursday, February 17, 2022, at Prisma Health – Oconee Memorial Hospital. Born August 14, 1952, he was the son of the late Oliver W. Earle and Bessie L. (Noland) Earle. Mr. Earle was United States Veteran having served his Country in the U. S. Navy. He was a beloved father, brother, and grandfather. Mr. Earle is survived by his son Hilton Lee Earle, Jr. of Chesapeake, VA. Four sisters; Patricia Earle of Seneca, SC, Bessie Covington of Charlotte, NC., Betty Jones of California, Mary Cooper of McAlpine, Fl., and one brother Oliver Earle, of Greenville, SC, and a host of nieces and nephews. In addition to his parents, he is preceded in death by his three brothers James, Robert, and Harry Earle. There are no formal services scheduled at this time. Mountain View Funerals and Cremations- Seneca Chapel is assisting the family of Hilton Lee Earle.

The family of Hilton Lee Earle created this Life Tributes page to make it easy to share your memories.

Send flowers to the Earle family.