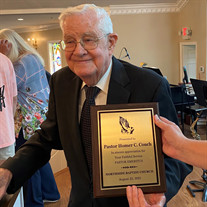 Homer Cleveland Couch, Sr. Pickens, South Carolina Homer Cleveland Couch, Sr. passed away at his home on September 22, 2021. Preacher Couch, as he was lovingly known, began his ministry as pastor at Calvary Baptist Church in Pickens, SC. He then continued his ministry at Holly Springs Baptist Church in Pickens, SC and then moved to Crossville, Tennessee where he served as pastor at Memorial Baptist Church. He also served as pastor at Antioch Baptist Church and Mountain Grove Baptist Church, and finished his career as Interim Pastor at Northside Baptist Church in Pickens, SC. Preacher Couch loved his church family at Northside Baptist Church and was honored to have been recently named Pastor Emeritus in a service where he preached his last sermon. Preacher Couch was a man who believed not only in serving his congregation but in serving his community. His life was spent ministering to those who were poor and rich, celebrating and grieving. He was present for births, officiated marriages and baptisms, and comforted families at funerals. Preacher Couch’s greatest desire was to serve like Christ would, serving those who were less fortunate and those who were suffering. His greatest joy in his life was to fulfill his calling as a pastor and as a public servant. Preacher Couch graduated from Travelers Rest High School and subsequently began his military service in the Army. After he completed his service, while working as a sales representative for National Biscuit Company in Miami, Florida, Preacher Couch surrendered to his calling and moved home to begin his seminary education. He studied at North Greenville University and Furman University, and obtained his bachelor’s degree from Luther Rice Seminary. While he was studying, he met his wife Shelba Powell at Rock Springs Baptist Church in Easley, SC where his father pastored. Preacher Couch saw Shelba playing the piano at a church service and knew she would be his wife. The couple served together until her death in 2015. Preacher Couch leaves behind his children Cleve Couch (Ashley), Christie Hemphill (Joel), Crystal Pitrois (Thomas Takayama) and his grandchildren Zachary, Ethan, and Christian Couch, and Marc and Julien Pitrois, his brother, nieces and nephews, and friends whom he loved deeply. The family is grateful to his caregivers who cared for him during the last days of his life so that he could fulfill his wish of dying at home. A private family burial was held on September 25, 2021. A Celebration of Life service will be held at 2:00 PM on Saturday, October 16, 2021 at the Pickens Amphitheater, 114 W Main St, Pickens, SC 29671. Seating will be provided for the immediate family. For those attending who will need seating you are encouraged to bring your own chair. Mountain View Funeral Home is serving the Couch family.

The family of Homer Cleveland Couch Sr. created this Life Tributes page to make it easy to share your memories.

Send flowers to the Couch family.