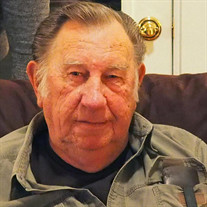 James Douglas “J.D.” Wallen, 83, of Greenville, after courageously battling cancer for three years went home to be with the Lord December 29, 2021. Born in Greenville, SC on September 3, 1938, he was the son of the late Horace F. Wallen and the late Juanita Hodgden of Greenville, SC. He was the loving husband of the late Janice L. Wallen. J.D. was a Veteran of the United States Air Force. Upon honorable discharge, he worked as an electrician with Davis Electrical, Flour Daniel, and Century 3 Inc. until retirement. J.D. was an avid outdoorsman who loved to hunt and fish. One of his favorite pastimes was traveling to Cades Cove to enjoy God’s Creation. He also served his community as a member of the Hejaz Shriners and Masonic Lodge #345. He will be remembered for his deep love for his family and his generous giving towards mission work. He is survived by his daughter, Tammy Rainey of Greenville, SC; son, Shawn Wallen (Christie) of Marietta, SC; grandson, Nathaniel Rainey of Brighton, MI; granddaughter, Shannon Burns (Rhett) of Greenville, SC; grandson, Errol Rainey, Jr. (Linda) of Chapel Hill, NC; eight great-grandchildren; and three brothers and three sisters. Along with his parents and wife, he was predeceased in death by his loving son-in-law, Errol “Mark” Rainey, Sr. He was of the Baptist faith. A funeral service will be held at Marietta First Baptist Church on Sunday January 09, 2022 at 3:00 p.m. Visitation will be held prior to the service beginning at 2:00 p.m. in the church sanctuary. Graveside and burial will follow at Coleman Memorial Cemetery. Pallbearers will be Rick Greer, Ron Darnell, Virgil Bonham, Brian Thompson, Bob Garrett, and Lewis Sloan.

The family of James Douglas "J.D." Wallen created this Life Tributes page to make it easy to share your memories.

Send flowers to the Wallen family.