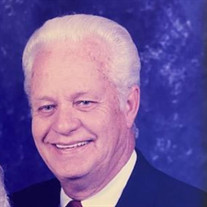 James Vernon Stephens Pickens, South Carolina James Vernon Stephens, born March 1, 1942, passed away Monday, February 7, 2022, at the age of 79, due to complications related to diabetes. James was born and raised in Pickens, S.C. He was a member of Bethany Church of God. He enjoyed playing music and was a talented musician and singer. In his younger years, he played country music with the “Town and Country Playboys” playing various venues and opened shows for many well known country singers. He continued to play and sing country music and applied his gift of music to the church. James was known as the “Sausage Man” in his community, as people loved to get fresh sausage from him when available. He also was an avid fisherman, who loved spending time on the lake, with family and friends on his pontoon. James is survived by Patricia Stephens, his wife of 21 years, a sister Carolyn Todd, a son, two daughters and their families of Pickens S.C., two step daughters and their families of Cumming, G.A., as well as family and friends. He is preceded in death by his parents, Rev. Vester and Corrine Stephens, son Travis Stephens, and sister Rosey Sentell of Pickens, S.C. Mr. Stephens wishes were to have a private memorial service, with a burial at Gap Hill Baptist Church in Six Mile, S.C. In lieu of flowers donations can be made to Bethany Church of God, PO Box 323, Pickens, S.C. 29671 – Attn: Richard Simmons Mountain View Funeral Home is serving the Stephens family.

The family of James Vernon Stephens created this Life Tributes page to make it easy to share your memories.

Send flowers to the Stephens family.