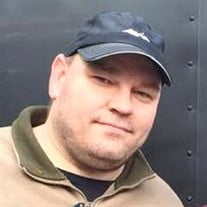 Jason Harold Medlin Pickens, South Carolina Jason Harold Medlin, 44, of 202 Reece Mill Rd, passed away Friday, December 18, 2020 at his home. A native of Pickens County, Jason was born November 30, 1976, the son of the Mary Ruth Powell James and the late Raymond Edward Medlin. He was a graduate of Pickens High School, Class of 1997, and attended Central Wesleyan College. He was a loyal employee of Subway in Pickens for many years. He later worked in the security industry. Mr. Medlin was a member of Mt. Tabor Baptist Church, and was known by his friends to have trusted in Christ alone as his Savior. He was a gentle soul who had a servant’s heart. Jason or “Metal Head” as most knew him, was one of the sweetest people you would ever meet. He always greeted you with a smile on his face and was genuinely happy when he saw you. He was always willing to help anyone, anyway he could and was a wonderful example of human kindness. He will be deeply missed by all those who loved him; his family, friends, and the community. In addition to his mother, Ruth James, Jason is survived his stepfather, Dennis James of Pickens; three brothers, Gary Medlin of Dacusville; Dean Edward of Pickens; and Joseph Medlin of Seneca; two sisters, Tracy Masters of Pumpkintown, and Rachel Turner of Liberty. A private interment will be at the Mt Tabor Baptist Church Cemetery, 1700 Mt. Tabor Church Rd, Easley. The family will be at the home of Mrs. Ruth James, 779 Meece Mill Rd, Pickens, SC 29671. Flowers will be accepted. Please also consider giving to a Family Care Fund established for Jason’s by going to https://gofund.me/9e60df8d. All funds will go straight to the family to help with funeral/burial and other related expenses, as well as the care of Jason's brother. Mountain View Funeral Home is serving the Medlin family.

The family of Jason Harold Medlin created this Life Tributes page to make it easy to share your memories.

Send flowers to the Medlin family.