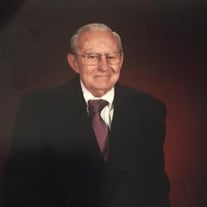 Jerry Walter Kelley, 86, of Pickens and beloved husband of Esther Winchester Kelley, died Wednesday, Aug. 2. Son of the late Walter D. and Beulah Kelley, Mr. Kelley was born on May 23, 1931 and grew up in the Red Hill community of Pickens, he loved the land and its people. He was retired as a plumber and electrician and was known for his sweet spirit and for his willingness to help others at any time and for any reason. He was a man whose handshake was his word and his calling card was his integrity. Excellence was a hallmark of every job he performed. He was a devoted family man and was a loving father and grandfather. He was a gentle man who spoke more by his example than he ever said with his words. He loved simple things – a job well done, time with his family, a good steak cooked to perfection. Mr. Kelley cherished his relationship with his Lord and Savior and he truly exemplified the servant attitude with everyone he encountered and in all his actions. He was a member of Grace United Methodist Church where he was a member of the Men’s Club and served as a roadie with the Grace Bell Choir. In addition to his wife of the home, Mr. Kelley is survived by four daughters: Carolyn Holder (Steve) of Lilburn, Georgia; Joyce Gillespie (Tommy), Marie Finley (Chuck) and Frances Stewart (Phil), all of Pickens; a brother, Harold Kelley of Pickens; 10 grandchildren, Kelley Reid (Tim), Nikki Culbertson (Matt), Matthew Holder (Shilo), Heather Simmons (Lance), Cherie Yarborough (Clint), Meghan Knapp (Eric), Carly Fitzpatrick (Kason), Tiffany, Sabrina and Sarah Stewart; and 17 great-grandchildren. In addition to his parents, Mr. Kelley was also pre-deceased by a sister, Edna Gravely, and a grandson, Samuel Stewart. Funeral services will be held Sunday, Aug. 6, at Grace United Methodist Church. The family will receive friends at the church from 1 to 2:30 p.m. with services following at 3 p.m. Burial will be at Hillcrest Memorial Park. Memorials may be made to Grace United Methodist Church, 309 East Cedar Rock Street, Pickens, SC or to Patriot Hospice, 54 Bear Drive, Greenville, SC 29605. Mountain View Funeral Home is serving the Kelley Family

Jerry Walter Kelley, 86, of Pickens and beloved husband of Esther Winchester Kelley, died Wednesday, Aug. 2. Son of the late Walter D. and Beulah Kelley, Mr. Kelley was born on May 23, 1931 and grew up in the Red Hill community of Pickens,... View Obituary & Service Information

The family of Jerry Walter Kelley created this Life Tributes page to make it easy to share your memories.

Jerry Walter Kelley, 86, of Pickens and beloved husband of Esther...

Send flowers to the Kelley family.