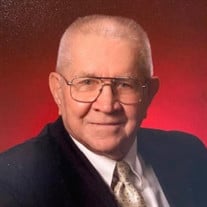 Jesse Harold Pace, 88, of Pickens, SC, husband of Bobbie Bolding Pace, ascended into the arms of Jesus on April 17, 2020. Harold was born in Pickens, SC, a son of the late Vernon and Ada Pace. He graduated from Pickens High School in 1951 and was employed in construction and trucking until his retirement. He was a foreman of a construction crew that helped to clear Lake Jocassee and Lake Keowee. He ended his working career hauling trusses for Mac’s Trusses in Greenville. He was a member of the South Carolina National Guard in the 1950s. He was a member of East Pickens Baptist Church in Pickens. He was also a volunteer fireman for the Pickens Fire Department for many years and he was a member of the Pickens County Bear Hunters Association. In addition to his wife of almost 68 years, he is survived by his two daughters Tebra Cloer (Dr. Michael Cloer) of Rocky Mount, NC, and Freda Coyle (the late Redmond Coyle) of Easley; grandchildren, Anna Jabali, Clemson Coyle, Cameron Coyle, Jacob Cloer, Noelle Coyle, Aaron Cloer, and Courtney Coyle; great-grandchildren, Nyla Jabali, Michael, Gideon, Sophia and Rachel Cloer, Silas, Mary and Judah Cloer, Pace, Rett and Grady Coyle, and Noah and Corban Coyle. He was predeceased by two brothers, Joe Melvin Pace of Ninety Six, and Jerry Lee Pace of Easley. His body will be open for public viewing on Monday, April 20, in the chapel of Mountain View Funeral Home in Pickens from 9:00am-2:30pm. A private graveside service will be held that same day at Mountain View Baptist Church, 336 Mountain View Church Road in Six Mile. Conducting the service will be Dr. Michael Cloer, Rev. Wilton Bolding, Rev. Jamie Duncan, and Mr. Rick Grant, Harold’s Sunday School teacher. The family would like to especially thank our loving neighbors and friends who have helped in Harold’s care for the past few years, in addition to our church members. Special thanks to Regency Hospice of Greenville for the excellent, loving care they gave to Harold. Flowers will be lovingly accepted or memorials may be made to the International Mission Board of the Southern Baptist Convention in Richmond, VA. Please visit www.mountainviewfunerals.com who are assisting the family.

Jesse Harold Pace, 88, of Pickens, SC, husband of Bobbie Bolding Pace, ascended into the arms of Jesus on April 17, 2020. Harold was born in Pickens, SC, a son of the late Vernon and Ada Pace. He graduated from Pickens High School in 1951... View Obituary & Service Information

The family of Jesse Harold Pace created this Life Tributes page to make it easy to share your memories.

Customized sympathy cards. Mailed for you.