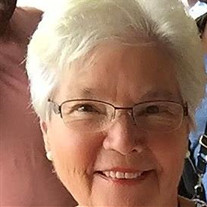 Juanita Anthony Campbell, 82, devoted mother and grandmother, passed from this life to her heavenly home Tuesday, April 9, 2019 after a sudden illness. She was surrounded by her loving family, who sang gospel hymns as she slipped away. Born March 1937, she was the second child and first daughter of Jacob Vernon and Pearl Clark Anthony, who preceded her in death. Juanita married Joe Campbell in 1956 and became a beloved wife and the ultimate nurturer as a mother and grandmother. She also was a caregiver to several nieces, nephews, her grandchildren and their children over the years – all who called her Nana. She was never one to sit still for long and loved nature and being outside. She was vibrant, strong, independent and loved spending time visiting with her sisters and brother. Juanita was a woman of strong faith who loved the Lord and drew strength from His mercy. In addition to her parents, Juanita was preceded in death by her husband, Joe, oldest brother, Fulton Anthony and a brother-in-law, Johnny Joe Davis. She is survived by her four daughters, Sheila Koza (Don), Pamela Jones (Rick), Denise Baldwin (Ronnie) and Becky Campbell; eight grandchildren: Jonathan Koza (Rebekah), Jessica Jones Barker (Julian), Jake Koza, Eric Jones, Justin Baldwin, Dillon Baldwin (Hillary), Lori Baldwin and Nathan Baldwin; seven great-grandchildren: Harrison Koza, Natalie Koza, Walker Akers, Claire Barker, Cosette Barker, Asher Barker, Briggs Barker and Denver Baldwin. Her love for them was immeasurable. Also left to cherish her memory are her sisters, Leuna Kelley, Lillie Davis and Molly Denton and a brother, Henry Anthony; two aunts, Betty Anthony Crawford and Shirley Anthony Spencer, numerous nieces and nephews and other extended family. A celebration of Juanita’s life is scheduled for Saturday at 2 p.m. at Mountain View Mortuary Funeral Home, 105 Florence St., Pickens. Prior to the celebration, the family will receive friends at 1 p.m. at the funeral home, and internment will follow at Hillcrest Cemetery, 2402 Gentry Memorial Highway, Pickens.

Juanita Anthony Campbell, 82, devoted mother and grandmother, passed from this life to her heavenly home Tuesday, April 9, 2019 after a sudden illness. She was surrounded by her loving family, who sang gospel hymns as she slipped away. Born... View Obituary & Service Information

The family of Juanita Anthony Campbell created this Life Tributes page to make it easy to share your memories.

Send flowers to the Campbell family.