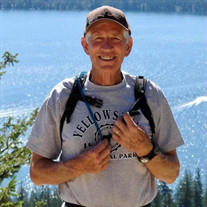 Larry Kay Hendricks , age 82, husband of Brenda Holland Hendricks, passed away on Tuesday, March 23, 2021 at his home after a brief illness. Larry was the son of the late Wister & Lila Hendricks. Survivors include his wife, Brenda, three sons; Scott, of Liberty; Greg (Tina) of Easley and Shawn of Easley; and one daughter, Kathy (Scott) Dublin of Due West; step-children, Lisa (Eric) Garris of Melbourne, Florida & Lane Goelz of Virginia Beach, Virginia; nine grandchildren, eight step-grandchildren and 17 great- grandchildren. Larry loved the Table Rock and Dacusville area where he lived most of his life. He and Bobby Richardson founded a successful business in 1967, Hendricks & Richardson, Inc. in Piedmont. In 1988, Larry and sons launched Hendricks Fabrication in Piedmont. In addition to his businesses, he was a two-time National Champion driver in SCCA Showroom Stock A-Class. In his early years, Larry loved racing cars & motorcycles regionally and locally. Later, he enjoyed golfing, hiking, walking & horse-back riding with his buddies in the upstate, as well as Wyoming, Montana & Virginia. Larry loved the West and enjoyed many trips to that area with his family and friends. A Celebration of Life Service will be held Saturday, March 27, 2021 at 2:00 p.m. at the Pinnacle Pavilion at Table Rock State Park in Pickens, SC. The Pinnacle Pavilion is located through the West Gate Entrance at the park, in the Camp Ground area. Handicap parking & entrance are located at the rear of the facility. Larry is pre-deceased by his parents and step-brothers, Ben Hendrix & Bruck Hendricks and step- sister, Elsie Hunt. In lieu of flowers, the family requests that memorials be made to: Table Rock State Park, 158 E. Ellison Lane, Pickens, SC 29671. Memorials will be used to maintain and improve park trails. A private burial will be held at a future date at Pleasant Grove Baptist Church Cemetery in Pickens, SC. Mountain View Funeral Home is assisting the Hendricks family.

Larry Kay Hendricks , age 82, husband of Brenda Holland Hendricks, passed away on Tuesday, March 23, 2021 at his home after a brief illness. Larry was the son of the late Wister & Lila Hendricks. Survivors include his wife, Brenda, three... View Obituary & Service Information

The family of Larry Kay Hendricks created this Life Tributes page to make it easy to share your memories.

Send flowers to the Hendricks family.