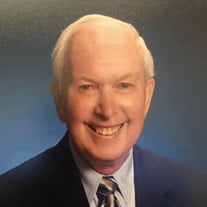 Lawrence “Larry” Curtis Thomas Clemson, SC Lawrence “Larry” Curtis Thomas, age 90, of Clemson, SC passed away on Thursday, February 3, 2022, at Prisma Health- Oconee Memorial Hospital. Born June 3, 1931, he was the son of the late James Robert Thomas and Hattie May Jarboe Thomas. Larry grew up in Lebanon, KY working on his father’s tobacco farm. For fun he and his friends would repair broken horse buggies and race them until they were beyond repair. He was employed with L & N Railroad in Louisville, KY where he attended night school at the University of Louisville and earned a B.S. in Accounting. Upon his graduation, his first accounting job was with Sangamo Electric in Springfield, IL and he transferred with the company to Clemson, SC in 1972. Larry was employed with several manufacturing plants during his career as an accountant, including Homelite, TRW, and Danfoss. Larry was a Veteran of the United States Air Force during the Korean conflict. He was a member of St. Andrew Catholic Church since 1972 and was active with the Knights of Columbus for many years. Larry enjoyed square dancing weekly with his wife Betty as a member of the A-Squares in Anderson, SC. Larry also thoroughly enjoyed his monthly dinners with his friends from the Accounting Association. Larry is survived by his wife of 66 years Betty Thomas, son and daughter in law Dennis and Heather Thomas of League City, TX; daughters Judy Thomas of Duncan, SC and Jane Thomas of Matthews, NC; a grandson, Stephen Thomas and fiance’ Ashley Parshall of Oscoda, MI; one great grandchild Levi Thomas; and one brother Earl Thomas of Jacksonville, FL. In addition to his parents Mr. Thomas is preceded in death by three of his sons: Gary, Curtis, and John Thomas; brothers Bobby and Orville Thomas; and his sister Geraldine Russell. A Memorial Service will be held on Friday, February 11, 2022, at 1:00 PM from the Sanctuary of St. Andrew Catholic Church in Clemson, SC with Father Dan McLellan officiating. Inurnment will follow the service at Memory Gardens in Clemson, SC. The family is with their mother in Clemson. In lieu of flowers, memorials in Larry’s memory may be made to the St. Andrew Catholic Church Building Fund, PO Box 112 Clemson, SC 29633. Mountain View Funerals and Cremation – Seneca Chapel is assisting the family of Mr. Larry Thomas.

The family of Lawrence "Larry" Thomas created this Life Tributes page to make it easy to share your memories.

Send flowers to the Thomas family.