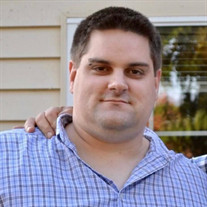 Marshall Robert Crispell Pickens, South Carolina Marshall Robert Crispell, 38, son of Charles Robert Crispell and the late Diane Germaine Milanak Crispell, passed away on Tuesday January 25, 2022. Mr. Crispell was born in West Palm Beach Florida on January 10, 1984. Marshall was a graduate of Wellington High School and a member of the National Honors Society. He also attended Florida State University and the University of Northern Colorado. Marshall was a recipient of the Florida Bright Futures Scholarship and was employed by Real Page Inc. He enjoyed collecting coins and was an avid music listener of Tool, A Perfect Circle, Incubus, and Evanescence. In addition to his father, Charles Crispell of Pickens, Mr. Crispell is survived by his three brothers; Michael, Matthew, and Madison, his sisters-in-law; Sowmya, and Sharlynne, his nephews; Logan and Reece, and his cousins; Jack, Spencer, Lauren, and Jesse. Mr. Crispell was predeceased by his mother; Diane Crispell, and his grandparents; Andrew and Emily Milanak, and George and Edith Crispell. A receiving of family and friends will take place on Saturday January 29, 2022, in the chapel of Mountain View Funeral Home from 11:00 - 12:00 with a memorial service to follow at 12:00 noon. Mountain View Funeral Home is serving the Crispell Family.

The family of Marshall Robert Crispell created this Life Tributes page to make it easy to share your memories.

Send flowers to the Crispell family.