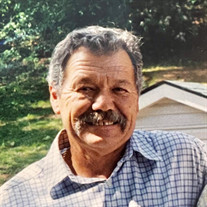 Ray Alvin Fisher, 73, passed away at Manna Post-Acute Care in Pickens, SC on Tuesday, February 15, 2022. Born in Transylvania County, North Carolina to Ernest Bolden Fisher and Gaynell Callahan Fisher, Ray grew up with his siblings enjoying the scenic landscapes of the Eastatoee Valley in Pickens County. A lifelong resident of Pickens, Ray was a 1967 graduate of Pickens High School. Following his graduation from high school, he enlisted in the United States Navy, where he served during the Vietnam War. After serving his country, Ray worked for the City of Pickens for many years before his retirement in 2013. He was a member of Piney Grove Baptist Church in Sunset. Ray was an avid outdoorsman who enjoyed hunting and fishing in the Carolina mountains and throwing shrimp nets on Edisto Island. Ray is survived by his loving mother, Gaynell Fisher, of Pickens; his devoted siblings: Rita Fisher (Shawn Morris) of Eugene, Oregon, Sandy Montgomery (Randy) of Knoxville, Tennessee, COL(R) Lynn Fisher (Libby) of Pickens, and Terry K. Fisher (Mona) of Pickens; his beloved sons: Jeremy Ray Fisher and William Chadwick Fisher, both of Pickens; his precious grandchildren: Jeremy Ray “Jed” Fisher, Jr., Mackenzie H. Fisher, Haley F. Moore, and Chandler Fisher; a special nephew, Ryan Ramey, and several great-grandchildren and nieces and nephews. He is predeceased by his wife, Julie Wood Fisher, and his father, Ernest B. Fisher. A private graveside service will be held at Piney Grove Baptist Church. The family wishes to thank the staff at Manna Post Acute, especially the CNAs and nurses, for their love, care and gentle touch for Ray during the last stage of his life. Memorials may be made to Meals on Wheels of Pickens County, 349 Edgemont Avenue, Liberty, SC 29657 (https://pcmow.org/memorial-honorarium/) or Piney Grove Baptist Church, 902 Pine Grove Church Road, Sunset, SC 29685.

The family of Ray Alvin Fisher created this Life Tributes page to make it easy to share your memories.

Ray Alvin Fisher, 73, passed away at Manna Post-Acute Care in...

Send flowers to the Fisher family.