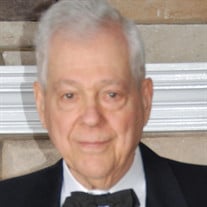 Richard Edward Imershein Pendleton, SC Richard Edward Imershein passed away peacefully on Friday, December 17, 2021, at AnMed Health Medical Center. He was 94. A native of New York, he was the son of Louis and Rosetta Imershein, both deceased, as are two of his brothers, William and Benjamin Imershein. In 1948, Mr. Imershein graduated from Clemson College with a bachelor’s of science in mechanical engineering. While proudly serving his country in the Air Force, he met his cherished wife of 67 years, the late Virginia “Lee” Imershein. They were both in active duty at Lackland Air Force Base. Mr. Imershein joined IBM’s office in Long Island, NY, in its early days. There, he developed an illustrious 34-year career in corporate management and competitive analysis that required him to move his family to France and Germany, and travel extensively around the world. After retiring from IBM, he served as senior vice president of the Gartner Group, a technology research and consulting company based in Stamford, CT, where Mr. Imershein and his family lived for 30 years. Mr. and Mrs. Imershein moved to Salem, SC, in 1997. An accomplished chef of Chinese cuisine and long-time oenophile, Mr. Imershein enjoyed teaching Chinese cooking and wine appreciation in Clemson University’s extension program. He was also an advocate for curing prostate cancer, regularly participating in the local Us TOO prostate cancer education and support network. He was proud to advise the federal government on which prostate cancer research projects to fund. Throughout his life, Mr. Imershein was actively involved in his faith community and served his congregations in various roles, including as president of his temple. He was also a pioneer of outreach programs for interfaith couples as part of the New York Federation of Reform Synagogues. Mr. Imershein is survived by his daughters Deborah Imershein of Pendleton, SC, Diane Imershein of Central, SC and Deirdre Haj (Joseph) of Minneapolis, MN; his granddaughter Samantha Haj of Minneapolis, MN; his brother Charles Imershein (Lois) of Boca Raton, FL; and his many beloved nieces and nephews. A celebration of Mr. Imershein’s life will be held on Tuesday, December 21, 2021, at 11:30 a.m. at Mountain View Funerals and Cremations – Seneca Chapel, in Seneca, SC. Rabbi Samuel Rose will officiate. The family will host a gathering of family and friends following the service at the funeral home. Interment will follow at 2:30 p.m. at Ramsey Creek Preserve. In lieu of flowers, the family requests that gifts to honor Mr. Imershein’s memory be made to the Temple of Israel, 400 Spring Forest Road, Greenville, SC 29615; the Class of ’48 project at Clemson University; or Us TOO International. Mountain View Funerals and Cremations – Seneca Chapel is assisting the family.

The family of Richard Edward Imershein created this Life Tributes page to make it easy to share your memories.

Send flowers to the Imershein family.