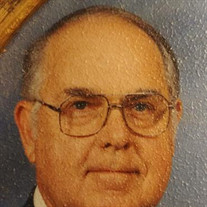 Robert I. Merck, Sr. Pickens, South Carolina Robert I. Merck, Sr., 84, husband of Hazel Gilstrap Merck, passed from this life into his eternal reward Friday, May 25, 2018 at his home surrounded by his family. Born in Pickens County he is a son of the late William Frank Merck and Eula Jane Willimon Merck. Mr. Merck was an active member of Secona Baptist Church serving as a Sunday School Teacher, Choir Director and as a Deacon. Also, he was a Service Manager with Roper Motor Company in Easley, Tinsley – Crane Chevrolet. He then taught Auto Mechanics at Pickens County Career Center until his retirement. Robert was known for his love of hunting, fishing and competitive Archery. Because of his love of archery, he held numerous titles and was a member of the Keowee Bowmen Club. Another hobby of his was building and flying radio-controlled airplanes and being a member of the Raptors RC Aviation Club. Survivors include his wife Hazel of sixty-four years of the home, a son Robert I. Merck, Jr. and his wife Angela of Pickens, a daughter Pamela Merck Harris and her husband Robert of Pickens, four grandchildren, Edie Harris Young (Will), Robert Branyon Harris, Caleb Robert Merck, Seth Christopher Merck, five great grandchildren, Dayla Young, Lily Young, Morgan Young, Machen and Anthony Harris. Mr. Merck was predeceased by his parents, four sisters and two brothers. Visitation will be 2 pm until 3 pm Tuesday, May 29, 2018 at Secona Baptist Church with the funeral service to follow at 3 pm. Burial will be in the church cemetery. Memorials may be made to Secona Baptist Church, 234 Secona Road, Pickens, South Carolina 29671. The family is at the home. Mountain View Funeral Home is serving the Merck family.

Robert I. Merck, Sr. Pickens, South Carolina Robert I. Merck, Sr., 84, husband of Hazel Gilstrap Merck, passed from this life into his eternal reward Friday, May 25, 2018 at his home surrounded by his family. Born in Pickens County he is... View Obituary & Service Information

The family of Robert I. Merck Sr. created this Life Tributes page to make it easy to share your memories.

Send flowers to the Merck family.