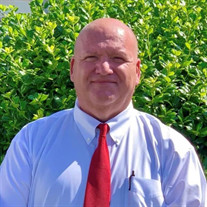 Robert Brian Tribble Seneca, SC Mr. Robert Brian Tribble “Prez”, 49, of Seneca, SC passed away suddenly at his home on Monday, April 11, 2022. Born May 6, 1972, in Kingsport, TN, he is the son of Clayton R. Tribble (Rachel) of Cape Coral, FL and Terry Jean Presley (Otis) of Kingsport, TN. Mr. Tribble was a loving Son, Father, Grandfather, and friend, whose smile was always warm, welcoming, and larger than life. He was a fan of his beloved Tennessee Volunteers football team. He served the citizens of Oconee County and the City of Seneca as a Deputy Sheriff and Police Officer for 20 years. In his later years, he continued to serve them through the funeral service and patient care professions. In addition to his parents, he is survived by his wife, Ms. Farrah Martin. A previous wife Paula Childress (Tony) of Seneca, son Zackery Lamb of Kingsport, TN, son Nicholas Tribble of Central, SC, son Hunter Tribble of Kingsport, TN, and daughter Madison Tribble of Seneca, SC, two stepchildren, Camryn and Chandler Martin of Seneca, SC. He leaves behind his three grandchildren: Khloe Lamb, Paisley Tribble, and Ella Burnes. He is also survived by one brother, Joey Tribble (Cristi), stepsister Ashley Light, stepbrother Damon Richards as well as three nieces and five nephews and one great niece. Mr. Tribble is preceded in death by his stepfather Mr. Otis Leroy Presley and his stepsister Angel Hope Richards. The family will receive friends on Tuesday, April 19, 2022, from 4:30-6:30pm at Mountain View Funerals and Cremations – Seneca Chapel. A Celebration of Life service will be held by the family at a later date. In lieu of flowers, donations may be made to Celebrate Christmas with a Hero, 205 N. Depot St, Seneca SC 29678. The family is at their respective homes. Mountain View Funerals and Cremations – Seneca Chapel is assisting the family of Mr. Robert Brian Tribble.

The family of Robert Brian "Prez" Tribble created this Life Tributes page to make it easy to share your memories.

Send flowers to the Tribble family.