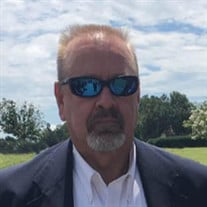 Sammy Gerald Davis Pickens, South Carolina Sammy G. Davis, 58, husband of Susan Blakley Davis, passed from this life Friday, September 1, 2017. Sammy was born in Greenville, South Carolina a son of the late Truman W. and Myria Crenshaw Davis. He was employed with Advanced Climate Control with his sons. Survivors include his wife Susan of 40 years of the home, a son Jason (Tracy) Davis of Sunset, a daughter Jennifer (Chad) Clark of Pickens, a son Josh (Tara) Davis of Pickens, grandchildren Kaitlyn Davis, Ashley Davis, Lillie Davis, McCaylan Clark, Tanner Clark, a brother Michael Davis, sisters Linda Knight, Delta Cartee, Lavone Davis, best friend, Robbie Hoover, and his mother-in-law Lila Blakley. Sammy was known to be an outdoorsman, he loved fishing and hunting. He was also known for how special his family and friends were to him as well as the special love he had for his grandchildren. Visitation will be held at 11 AM Monday, September 4, 2017 in the chapel of Mountain View Funeral Home with the funeral service to follow at 1 PM in the funeral home chapel conducted by Reverend Gordie Hager and Philip Forrester. Burial will follow at Holly Springs Baptist Church Cemetery. The family will be at the home of his son Josh after the services on Monday, September 4, 2017. Mountain View Funeral Home is assisting the Davis family.

The family of Mr. Sammy Gerald Davis created this Life Tributes page to make it easy to share your memories.

Send flowers to the Davis family.