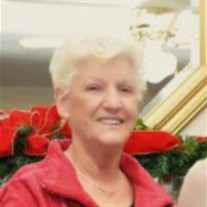 Sylvia Jean Willimon Whitaker, 82, of Piedmont, loving wife, mother, and Nana, went to be with her Lord and Savior on February 7, 2020, with her family by her side. Sylvia, daughter of the late Homer Matthew Willimon and Bertie Johnston Willimon,... View Obituary & Service Information

The family of Sylvia Willimon Whitaker created this Life Tributes page to make it easy to share your memories.

Send flowers to the Whitaker family.