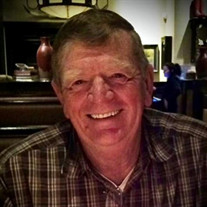 Wayne Eugene Newton Sunset, South Carolina Wayne Eugene Newton, 68, husband of 51 years of Johnnie Cassell Newton passed away Sunday, September 27th, 2020 surrounded by his family at his home after a battle with cancer. Wayne is a son of the late Rev. Norman and Mildred Newton. His early life with his parents and siblings was filled with faith, fun and love. He was a lifelong resident of Pickens County and attended Pickens High School. He was a retired Painter and Business Owner. Wayne was also a member of Holly Springs Baptist Church, where he previously served in the music ministry. Wayne married his sweetheart, Johnnie, when he was 17 years old. Together they share five children and eight grandchildren. His life was dedicated to God and loving and providing for his family. If he wasn't working or at home sitting on his porch, he could be found in the woods enjoying his favorite activity - hunting. Preparing for and leading the hunting season with family, friends, and loyal dogs was his favorite time of the year. He also had a lifelong love of music and was an incredibly talented musician. He loved to play the blues, but most of all, loved glorifying God through his music by playing and teaching countless others to play gospel music. He cherished relationships with others and had a gift for encouragement. He was very knowledgeable of the Bible and often in conversations, he pointed others to Christ through scripture and godly advice. He may not have spoke a lot of words but the things he would say always had meaning. His light for Christ and love of life will be greatly missed but never forgotten. His legacy of faith will continue to make a difference long after the end of his earthly life. Survivors include his wife, Johnnie, daughters; April Negrete (Jose) and Rebecca Summey (Johnny), a son, Matthew Newton (Lauren), a son in law, Jamie Pimlott, a daughter in law, Lynsey Newton, granddaughters; Taylor Durham, Emily and Sophie Negrete, Hannah and Maddie Pimlott, Cheyenne Newton, Harper Newton, and Reese Summey, brothers; Dan Newton (Sheila) and Pat Maxwell (Faye) and a sister, Shirley Lovinggood. Wayne was predeceased by his parents, Norman and Mildred Newton, his son, Tim Newton and his daughter, Libby Pimlott. A memorial service will be held at Holly Springs Baptist Church in Pickens, SC on Thursday, October 1, 2020 at 2:00PM, officiated by Rev. Barry Dilworth. The family will greet friends following the graveside service. In lieu of flowers, donations can be made to Holly Springs Baptist Church for use in the music ministry. Donations can be mailed to 3450 Table Rock Road Pickens, SC 29671 or made online by using the following link: https://5da16aad.churchtrac.com/give, where you can choose to “Give as a guest" at the bottom of the page and choose the category 'Designated - Choir Donations'. Mountain View Funeral Home is serving the Newton family.

Wayne Eugene Newton Sunset, South Carolina Wayne Eugene Newton, 68, husband of 51 years of Johnnie Cassell Newton passed away Sunday, September 27th, 2020 surrounded by his family at his home after a battle with cancer. Wayne is a son of the... View Obituary & Service Information

The family of Wayne Eugene Newton created this Life Tributes page to make it easy to share your memories.

Send flowers to the Newton family.