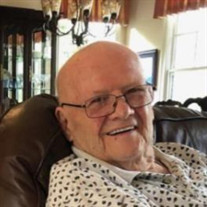 William D Garber (Bill) April 16, 1934 - December 20, 2021 Bill Garber, 87, formerly of East Longmeadow, MA, and Carroll County, Maryland, passed away in Sunset, SC on Monday, December 20, 2021. Born April 16,1934 in Hanover, PA, he was the son of the late John Wendell Garber and Pauline (Garber) Everhart. He was the husband of Mary Rose Garber (Labine), his wife of 66 years. He proudly served for four years in the Navy during the Korean War. He was employed for 35 years by the U.S. Postal Service in Springfield, MA. He will be missed by his wife, Mary Rose, his favorite gin rummy partner. Bill was known for having the best lawn in town; he enjoyed sailing with his brother in Florida and rode his bike thousands of miles around the Myakka River area. He always looked forward to trips to Maryland and our annual family reunions. In addition to his wife, Mary, he leaves two sons, Michael and wife, Peggy, of Sunset, SC, Ronald and wife, Chryslana, of East Longmeadow, MA and four grandchildren, Kyle, Ryan, Wyatt and Glenna. Bill loved his grand-dogs and they will miss him dearly. Kyle enjoyed dinners at Outback Steakhouse when he would joke around with Grandpa and Ryan; Kyle will always remember his subtle wit. Ryan treasured his Grandpa’s support at baseball games from tee ball through college. Wyatt's special memory was when his Grandfather gifted him his first full size violin after enjoying his concerts for many years. Glenna's happy memories include the many times he attended her softball games to support her no matter the weather. He is survived by his sisters, Sandra and husband Bill Martz of Keymar, MD, Linda and husband Rick Selby of New Windsor, MD, and sisters-in-law Bobbie Garber, Loretta Garber of Sarasota, FL; also, by brother, Scott Everhart of Baltimore, MD. He was predeceased by his brother, Charles Garber, of Sarasota, FL. Funeral arrangements are being handled by Hartzler Funeral Home of New Windsor, MD. A celebration of Bill’s life will be held on Saturday, January 29th beginning at 1pm with a Memorial Service at Hartzler’s immediately followed by Inurnment at Pipe Creek Cemetery, New Windsor, MD. Reception to follow. In lieu of flowers, please consider a donation to The Parkinson’s Foundation at www.parkinson.org You may leave a message or memory by visiting www.hartzlerfuneralhome.com

The family of William "Bill" D. Garber created this Life Tributes page to make it easy to share your memories.

Send flowers to the Garber family.